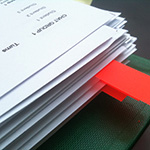 There’s a lot of conflicting advice out there about productivity matters, particularly when it comes to goal setting.

What types of goals should you set? How should they relate to what you do on your average day or week?

In Willpower, we see two psychological studies which seem to disagree. But with a little examination, they provide a clearer picture of some powerful ways to make our goals effective and powerful.

The results? The children with the short-term goals spent less time overall doing the self-study program but completed more work. They also performed better on a math test after the program was over.

The children who were instructed to set the long-term goals faired the same as children who set no goals at all.

Interestingly enough, the exact same journal that published the previous experiment soon after published another study showing the benefits of long-term goals.

Researchers interviewed high school students about their motivations at school and compared that with their academic performance.

The students who did the best in school were the ones who were more interested in long-term goals – like finding a good job, making a good amount of money, or achieving high social status.

The students with a long-term perspective outperformed those who focused on intermediate goals (getting good grades, earning a diploma) or short-term goals (passing a test, acquiring knowledge).

So Which Is It?

So which is better? Short-term goals or long-term goals? And what can we learn from these studies?

I think the conflict can be pretty easily solved by remembering a concept I’ve mentioned before: vision goals and target goals.

There’s the vision part which drives us and motivates us, and the target which keeps us aimed in the right direction and on the right track in the immediate future.

The vision portion of a goal is what motivates high school students to study: dreaming about having a better life. And here, the important part is seeing the daily actions as relating to achieving the vision, seeing that academic performance today is leading to the good life desired later on.

The target portion is what keeps us on task, like the children with the math problems. Seeing targets knocked off bit by bit can give us a sense of empowerment and motivate us to increased levels of focus and drive in the future.

How have you seen this phenomena at play in your life?