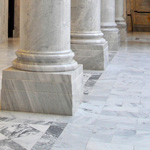 Too many people over-think when it comes to goal setting.

I can understand. There are dozens of different approaches out there. Each expert promises that their goal setting method is the critical factor in success.

And goals are important. I would say they’re crucial. But they’re not magic.

Goals deliver three major benefits (and one minor, optional benefit). I call them the three and a half pillars of goal setting.

Understand these three and a half simple concepts, and you’ll be able to effectively harness the power of goals.

Every goal setting approach boils down to these three core benefits:

There’s a fourth minor benefit: Goals give you the thrill of achievement. Some may get inspired and motivated when checking off goals they’ve accomplished. Others may not care as much. And the hitch is that missing deadlines may end up being demotivating for many.

That’s it. The three and a half pillars.

Simple, yes. But there’s a lot of power packed into those three and a half principles.

The Core of Every Approach

Every goal setting approach is just an attempt at maximizing the benefit from the three and a half pillars.

And there are a million variations.

Some say goals have to be specific and measurable. Some say they should be written down. Some say they need to be expressed in the present tense as if you had already achieved them.

Some say goals must be achievable in one year. Some say five years.

Interacting with Your System

So what variation does the best job at maximizing the benefit from the three and a half pillars?

The best system is whatever works for you.

This brings up an important point. There is a relationship between you and your goal setting method.

It is not acting upon you – you are interacting with your approach.

So the method that gives you the strongest three and a half pillars might not be effective at all for someone else.

Sometimes the difference is that one system came along at the right time – when you were ready to get serious about goals.

Or the difference is that one system matches your unique working style.

It might even be that one system feels like a drag while another one is just plain fun.

Back to the Fundamentals

So try out a particular approach. Review it and see if it’s working. Retool as necessary. Make it fun.

Concentrate on maximizing the three and a half pillars – and the rest will take care of itself.