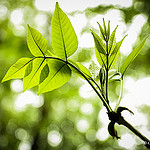 Have you ever read a stewardship parable (like the Parable of the Minas) and it made you feel guilty? Instead of identifying with the good stewards, you found yourself having more in common with the bad ones – you know, the ones that were called wicked and were punished severely.

And we may start to think we’ll never change. What’s the point in trying?

It’s important to believe that change is possible.

If you believe that you can’t change, you won’t truly be capable of putting in the effort needed. When the going gets tough, you’ll act in a way that’s consistent with your deep-down belief.

Instead of prayer and striving, you’ll throw up your hands and quit.

In Matthew 19, Jesus was commenting on a rich man whose abundant resources caused temptations. Temptations to be prideful. Self-sufficient. In love with the world.

But Jesus also told us that fighting off this temptation was possible… with God: “With man this is impossible, but with God all things are possible.”

In Genesis 18, the Lord promised a child for Abraham, remarking “Is anything too hard for the Lord?”

If God took a self-righteous murderer and turned him into an apostle and evangelist, he can change us as well.

Looking at your problems and fatalistically giving in is not a comment on your strength. It’s a comment on what you think about God’s strength.

Change is possible because God is God.

So let that drive you to prayer, dependence, effort… and to change.