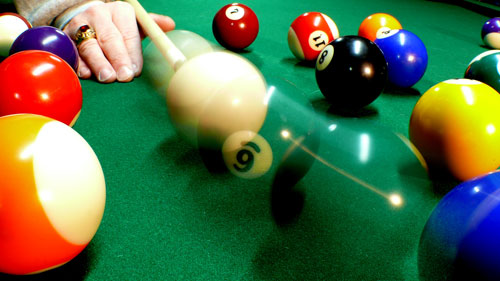 Have you ever watched professional billiard players on TV? It looks boringly easy for them.

I used to sit and scream at the TV, “They’re just getting easy shots! If I got shots that easy, I could make them too!” Why did I always have the tough shots and the so-called pros were just lucky enough to have all the gimme shots?

It’s Anything But Luck

As I learned a little more about pool, I saw why. The skilled player hits his current shot in such a way that the cue ball ends up where he wants it to be for the next shot, making the next shot look easy.

But controlling the cue ball in this way is anything but easy. First, you have to make sure you actually pocket the ball you’re currently shooting. Then, you’ve got to worry about hitting the cue ball with just the right amount of force: not too hard and not too soft. You’ve got to think about putting top spin or bottom spin or left spin or right spin on the cue ball and how the spin will be altered when it hits the rail or another ball. You’ve got to think about the geometry of where the ball will bounce when it hits the rail. You’re not only thinking about this shot, but the next shot and the shot after that and the shot after that – and what you have to do on this shot to make it all happen. All of these things are racing through your mind as you pace around the table, eye up your possibilities, and settle down to make a shot.

Are they just naturally calmer and nicer people? Maybe we’d like to think that way since then we’d be held to a different standard of accountability. After all, they’re naturals, right?

But what if that’s not it? What if in the middle of the fire, they’re actively filling their minds with the right thoughts? They’re going over scripture that they’ve memorized. They’re praying for strength and calm. They know what thoughts to guard against and how to guard against them.

It may look easy – but on the inside, it’s not.

I think we can powerfully apply this lesson to our time stewardship. Is productivity just something you have to be born with? Or perhaps effective people understand the importance of their thoughts? Perhaps every day they’re waging an unseen, internal war against sloth, procrastination, and unfocused busyness?

They may be living in a state of constant prayer, asking God regularly throughout the day for the guidance to know how best to spend their time. They may be praying for the strength to fight fatigue and discomfort, so that “whatever their hands find to do, they may do it with all their might.”

Are they mentally rehearsing their goals and objectives on a regular basis? Are they reminding themselves of the eternal significance of what they are or are not doing?

Do subtle alarm bells start to go off when they start to walk down the path of procrastination? How long can they aimlessly surf the web, play games, or stare at the wall without feeling uneasy with their stalling? Could it be that their internal soundtrack consists of a loop that says, “Do it now! Do it now!”?

This concept was eye-opening for me, and it was very encouraging as well. Yes, it’s easy to get bogged down by the fact that the mental effort it takes to be effective may be much more than we anticipated or hoped. But the encouraging fact is that these thought routines are attainable. We can rise to the level of these “naturals.”

And the first thought we need to grasp is this: it’s way more complicated than just having an easy shot and making it in.