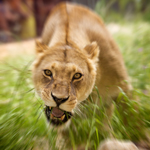 It’s tempting for us to read through Proverbs with the general idea that it outlines good and bad behavior. Anything mentioned under “fool, scoffer, sluggard” would be things we are not to emulate.

But think more deeply about what the Bible says about motivations. There’s a gold mine of wisdom when we think about the subtle connections the Bible makes.

John Piper talks about this in a great blog post I was reading this morning.

In Proverbs 26:13, the sluggard is expressing his fear about going outside – an irrational and fabricated fear of being slain by a lion.

This timid and scared man could be called a coward and a liar – but that’s not what the scriptures point out. He is labeled a sluggard.

Why is there a connection between being a sluggard and being afraid?

It’s because this man is obviously inventing excuses to rationalize his laziness. Laziness creates lies that we tell to ourselves and others.

It’s easy to read this passage and pat ourselves on the back. After all, I’ve never ducked out of work claiming that a wild beast was outside.

But just this morning, I cut back on my exercise because it’s quite cold and I didn’t want an injury.

Just this morning, I woke up a few minutes before my alarm was scheduled to go off. I felt exhausted from a rough night with a toddler who refuses to sleep, so I changed the alarm to go off an hour later.

Our human hearts and minds are sinful. And our power to deceive ourselves is impressive.

One of the things this proverb points out is that our sinful hearts and wicked desires actually drive our perception and our reason. We actually begin to see and think about things that line up with the way we want the world to be.

John Piper puts it this way:

It is an illusion to think that our hearts are neutral and incline in accordance with cool rational observation of truth. On the contrary, we feel powerful desires or fears in our heart, and THEN our mind bends reality to justify the desires and fears.

This changes the battle. It is no longer a matter of simply deciding to not be lazy. It’s no longer about only intellectually pointing out the rational folly of laziness.

We need to understand that this, and most other battles we fight, is about the heart as much as the mind. It is a fight between our fleshly desires and the godly desires within us.

So rather than reading another how-to article on being productive, what if we longed for more holy impulses and more God-given power to battle our sinful nature?