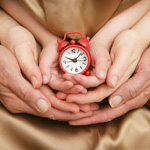 As married men, we hear a lot about leading our families.

It’s a high calling, to be sure. But it’s problematic when we think that a high calling can only be met with grandiose and complicated actions.

For instance, one of the greatest things I’ve done to lead my wife is a simple gift of time.

At first, I tried a lot of things that didn’t work.

When I realized I was responsible for my wife’s spiritual state, I wanted to encourage her and challenge her to have a daily quiet time – something she had not been entirely consistent with.

I thought the way I could lead her was by gently holding her accountable.

Occasionally I’d ask “How’s your quiet time going?” or “What are you learning in your devotions?”

But she still wasn’t having consistent devotions – and no amount of encouragement, challenge, or questioning seemed to change that.

A Way to Serve

Then it hit me.

Rather than sit back and cheer her on, why don’t I try to help her?

The greatest hindrance to her having daily devotions was simply that, as a stay-at-home mother of two little children, she always had her hands full.

So we agreed that at 8:00 almost every morning, I would watch our two boys and she would have some alone time to feed herself spiritually.

It sounds like such a simple thing – and it is. But it’s not an easy thing.

My heart was resistant to it at first.

Like everyone, I had a lot to do, and this was a cramp to my schedule.

Part of me also thought it was just her weak desire for God that was to blame – that she should make her time with God a priority regardless of her life circumstances.

And there’s some truth to those complaints. But loving your wife like Christ loves the church means serving her in ways that maybe seem inconvenient. In ways that seem unfair. In ways that you feel you ideally shouldn’t have to.

But over time, my heart has changed.

I’ve seen the difference it’s made in her life and how she feels.

It’s actually been enjoyable spending some time alone daily with the boys. (We read their children’s Bibles, pray, and then play a little while Mommy’s upstairs. It’s not just how I lead her – it’s part of how I lead them.)

But ultimately, I’ve enjoyed serving my wife. I’ve realized she does have it tougher than I once thought as a mother of little children.

And it’s been an opportunity for me to find joy in laying aside what my selfish desires would have me do in order to sacrifice and love my wife.