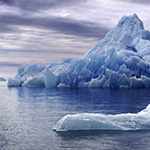 The following is a guest post from Mike St. Pierre.

Great leaders are like icebergs – there is a lot underneath the surface.  I visited Andy Stanley’s church in Atlanta last year for a Catalyst One Day event.  Having been fascinated by Stanley’s approach to ministry, I thought I would see for myself the platform that he’s built at NorthPoint.  I left with a deep sense of admiration.  Every detail was thought out and, as a Catholic, I wished every pastor could attend one of NorthPoint’s events.

A year earlier, I attended a David Allen workshop in Boston.  As with Stanley, I had studied Allen’s approach to productivity and wanted to see the show for myself.  While I knew that he wasn’t a Christian, his approach to life and work fascinated me.  Once again, I was impressed and left with a check list of items to implement and work into my daily life.

More Than Meets the Eye

While I know that Stanley’s journey has been documented recently by CNN and Loren has written extensively about Allen’s philosophical background, both have something to teach us about the inner life of a leader.

Andy Stanley was raised in the faith.  He saw in his father a role model of ministry, methodology and Scripture study.  Unfortunately, he also lived through the painful divorce of his parents, ultimately leading to his own departure from the church.  He had to travel through a “dark night” in order to find the strength needed to begin NorthPoint Community Church.  Now many years later, it appears that things have worked out quite well for Stanley.  Thankfully, he and his father have since reconciled.

David Allen’s history is more complicated.  Today as a sort of New Age minister and workplace consultant, Allen shares a methodology with whomever will listen called GTD, short for Getting Things Done.  After many years of working with Fortune 500 clients, Allen’s business is booming and GTD is as well known as Stephen Covey’s The 7 Habits of Highly Effective People.  Many Christian leaders have integrated at least a portion of GTD into their sermon prep and organizational theory.  Like Loren, I’ve modified my practice of GTD so that I take the parts that are consistent with my faith and leave the rest to the side.

Both Stanley and Allen are open about their respective histories.  Both are more interested in making a difference in the present than in reliving what got them to this point.  Neither is as charismatic as Tony Robbins or Joel Osteen and both prefer it that way.  Their two paths point us to some common elements that Christian leaders often demonstrate in daily life:

1. Leaders have deep interior lives.  Ask any Christian leader who has been in the public eye for any amount of time what their secret is and they will point to the abundant time they spend in prayer.  “Time with God” is not an optional appointment with great Christian leaders and solitude is sought out with frequency.

2. Leaders bring their history with them.  A rough childhood, a failed business, a wholesome friendship – great leaders are filled with them.  As with the saints of generations past, great leaders today channel their life experience into an architecture that God can use for good.

3. Leaders are more concerned with making a difference than with themselves.  A great leader is often self-deprecating and enjoys a good joke.  While he is aware of how a decision will look, that is rarely the most important part of how a decision gets made.  An authentic leader will do good deeds when no one is around and doesn’t crave the spotlight 24/7.  She knows that there will come a day when someone else will be the primary leader.

4. Leaders crave a lasting legacy that is beyond themselves.  Some Christian leaders seem to build an entire ministry around themselves rather than around a methodology or church.  This has been a criticism of mega-church pastors like Joel Osteen.  A great leader is honest about his own mortality and thinks beyond himself.  He’s building for a day when he won’t be around.

Whether you’re an Andy Stanley or a David Allen, it’s important to know where you’ve come from, what you stand for and for what you want to be remembered.  The tangible results matter in the public eye but the interior life of a leader is often just as important.

Question: Which of the four points above resonate with you and your leadership?

About Mike St. Pierre: Mike is the President of Morris Catholic High School in Denville, NJ.  His blog, www.thedailysaint.com outlines a framework for the intersection of faith and work.  He lives with his wife, Cary, and their four children in New Jersey.