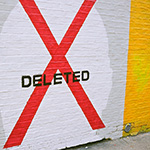 The following is a guest post from Grayson Pope.

You know what it’s like. That overwhelming desire to check Facebook. Maybe you got a new message, or maybe someone wrote on your wall.

So, of course, you check it.

But at what cost?

Well, that cost is becoming more and more clear as the numbers develop and our online habits are studied.

In a word, the cost is simple — time. And it may be more time than you think.

That’s why I recently deleted my Facebook app and took back my productivity.

The statistics on the amount of time people spend on Facebook are staggering:

What’s not included in the statistics is what I call the “transition time,” which is the time it takes you to shift your focus from Facebook back to what you were doing.

These numbers allude to how pervasive Facebook is in our lives. In fact, we spend most of our time online on the social media giant.

But is it really that big of a deal?

For me it was.

But I found myself checking one app more than all the others. Yep, Facebook.

It was literally a time warp for me. I would open it up to check something or look at a particular profile, then 20 minutes later it was like I hadn’t even blinked! And that was happening multiple times per day.

I was forgetting portions of meetings, not paying attention to my wife when she was talking, and finding myself far less productive. All for updates that seem increasingly poor in quality.

I decided I couldn’t live this way any longer. Successful people, especially those who are successful online, have discipline in their lives. Social media is the new frontier for that discipline.

So I decided to do an experiment.

Over 2 months ago, I upgraded to a new phone. I downloaded all my normal apps except for Facebook. I wanted to see just how much of my productivity was being lost to it.

Turns out it was quite a bit.

I don’t have a way to quantify the results, but I did come to some interesting conclusions.

Before going on, it’s important to note I don’t think Facebook in general is a bad idea. I’m a blogger, as I said earlier, so I use it to build my platform and garner influence. It was the incessant checking that drove me away from the app itself.

After living without Facebook on my phone for over 2 months, these are the benefits I see in it for everyone:

It’s been more than 2 months since I’ve had the Facebook app, and I can’t say I miss it. Actually, it’s been one of the best technology decisions I’ve made in a long time.

Question: Do you think I’m crazy? Is using the Facebook app that big of a deal?

About Grayson Pope: Grayson is a Christ-follower, husband, and father, right in the middle of his story. But mostly he’s just a parched soul in search of God’s Living Water. You can follow Grayson on his blog and Twitter.