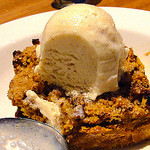 For many people, we are our own harshest critics. We have high expectations for ourselves. We push for perfect performance.

But sometimes having high standards can backfire.

Expecting perfection can lead to a psychological phenomenon that I will call the “might as well” effect.

Here’s a classic scenario: A dieter tries to eliminate eating any sugary desserts. In a moment of weakness, they slip and have a bite of cake.

Now they have failed. They’ve blown their diet. Today is shot. In that case… might as well just have that extra piece of cake. Might as well have a little ice cream to go with it. Might as well indulge in that candy bar while we chug that milkshake, too.

As discussed in Willpower, researchers have labeled this phenomenon “counterregulatory eating.” Experiments have shown that dieters who exceeded their caloric intake for the day would stop tracking what they ate, unable to recall how much they had just eaten.

This, of course, would lead to them eating more – more than non-dieters and more than other dieters who had not yet passed their daily calorie amount. It’s as if the dieters tightly controlled their eating until passing the threshold of failure, in which case they threw any sort of caution to the wind.

But this phenomenon isn’t restricted to eating.

We hate our procrastination and declare that we will stop. We slip at some point, the day is shot, so we might as well just ruin the rest of the afternoon with some more web browsing.

We set a goal to start waking up at 5:00 AM. The alarm goes off, but we hit snooze twice. Well, there goes that goal. Might as well sleep in a few more hours.

So how do we combat this?

Understand that success will come not from the absence of failure but from how you respond to failure. Get up and keep going.

When you see the day as a pass/fail test, all failure looks the same – a little time wasting is the same as a massive binge.

Instead, realize that one slip isn’t so bad. And blowing off the rest of the day will certainly make it worse.

3. Plan Ahead for Indulgences

Rather than have dessert kill your diet, fit it appropriately into your eating plan.

Likewise, watching some youtube videos for 10 minutes isn’t disastrous. If you really struggle with this, plan a few minutes into your day to watch a few videos. Plan it at a time when it’s the least damaging – do it while you are walking on the treadmill, eating lunch, or taking a brief break in between tasks.

If you can’t plan ahead for some reason, make it up on the backend. Sleep in for 20 minutes? Just stay up 20 minutes later tonight. This is more a psychological relief than really needing the extra 20 minutes to accomplish your tasks.

5. Satisfy the Urge in a Healthy Way

If you want to avoid an unpleasant task by watching TV, avoid it instead by cleaning, filing, exercising, or performing another task with some benefit. This would be the equivalent of snacking on veggies instead of snacking on desserts.

Tell yourself you’ll sleep in on Saturday morning but not today. It’ll be easier to wake up today – and you may find your temptation to sleep in evaporating by the time Saturday rolls around.

Ultimately, our solution shouldn’t lie in lowering our standards. We should line up with God’s standards of time management, not the world’s.

The key is to understand how to react to the inevitable failure we will face.